Drawing inspiration from the jazz standard “Blue Moon”, as popularized by Billie Holiday, I have crafted a story about personal goals, friendship and diversity with anthropomorphic animals. While this is part of my final project for my Children and Media class at the The New School – wonderfully taught by writer and creator P.G. Kain – I plan on finishing it and adding it to my portfolio. Also included is a short demo of one of the original songs used for the screenplay.

Feel free to take a look at the illustrated treatment with plot synopsis, character profiles, early concept art and the first few pages of the script.

Here’s to the fools who dream! Get ready for another day of sun and a lovely night, all La La Land lovers! The city of stars are shining bright for us, as the (almost) Academy Award-winning film and recipient of 7 Golden Globes will finally be available to bring home on April 25th.

Mia (Emma Stone) and Sebastian (Ryan Gosling)’s charming little adventures around LA in pursuit of their individual dreams – acting for Mia and jazz for Seb – are worth reliving, and the nostalgic references to Old Hollywood adds a degree of timelessness to this Damien Chazelle musical masterpiece.

Not only is La La Land going to be on standard DVD, 4K Ultra HD and the popular DVD/Blu-ray/Digital HD combo format. A collector’s edition steelbook will also be released on May 15th. Even Target, Walmart and Best Buy offer their own versions with varying covers.

With delightful special features that include Designing La La Land, Ryan and Emma: Third Time’s the Charm (I’m personally glad this one makes the list, as I enjoyed their previous works in Crazy, Stupid, Love and Gangster Squad), John Legend’s Acting Debut and La La Land‘s Great Party, this brand new classic is definitely a must-own, no matter which version you decide to pick!

Here are the many different cover artworks for La La Land… 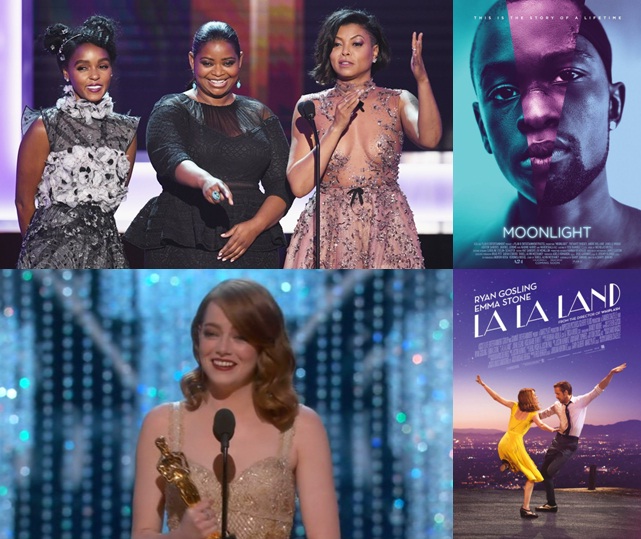 Film has always been a medium where dreams, ideas and stories can be visually expressed, and the annual Academy Awards is the one night that celebrates the magic of cinema and the large number of creative talents involved in Hollywood and international filmmaking – directors, actors, screenwriters, cinematographers, musicians, costume designers, animators and other professionals within the industry. The 2017 Oscars have finally brought back diversity, which was lacking in recent years. Jimmy Kimmel as the host provided entertainment as well as encouraged filmmakers from all over the world to continue to shape the films of tomorrow. Moonlight and La La Land – two wonderful films with equally inspiring messages – managed to pull a few wins out of all the nominations they got.

Moonlight, with its lyrical pace and compelling script that highlights the life of Chiron as he goes on an identity search, is an underrated hit with a huge likeability factor. Excellent performances by all the cast, especially Naomi Harris as Chiron’s unstable, crack addict mother! Mahershala Ali, who provided a much-needed warmth and a sense of belonging for young Chiron in the short scenes he had, managed to pull a win for Best Supporting Actor – very well-deserved. His charisma and gentlemanly quality showed throughout the Oscars ceremony. Winning Best Adapted Screenplay and Best Picture gave this film the credibility it deserves. A must-watch for audiences looking for life inspiration.

Fan-favorite La La Land seemed like a sure bet for the Oscars, and having Emma Stone win Best Lead Actress, Damien Chazelle as the youngest director to have won his category, Justin Herwitz for the charming music he created, and the award that was given for the film’s cinematography meant this film has what it takes to stand among the classics with its colorful visuals, dreamy leads (Emma as wannabe actress Mia and Ryan Gosling as aspiring jazz artist Sebastian) and the portrayal of dreams. John Legend, who played Gosling’s musician friend in the film delivered a smooth, cinematic mash-up of “City of Stars” and “Audition (The Fools Who Dream)” at the Oscars. “City of Stars” ended up winning Best Original Song, and rightfully so, even though all contenders were equally powerful.

Despite the announcement mix-up that created a lot of controversy at the end of the night, both Moonlight and La La Land are Oscar-worthy, and the inspirational messages they convey should be welcomed by all film audiences. The compelling and diverse storytelling in Moonlight and the pursuit of dreams that La La Land represents are gold.

As a bonus, I present you a list of my other favorite #Oscars2017 moments: